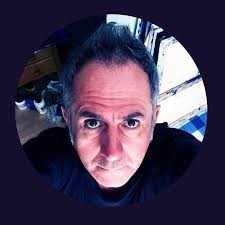 All of ZT Tosha's paintings are made in a multi-step process of representation. He starts with a blank canvas, adding gray aerial perspective, while constantly rotating the canvas. Then he pours or splashes paint directly from their tubes onto a horizontal surface (drip technique), enabling him to view and paint his canvases from all angles. Taking his color palette from the scene that he sees at that moment, he paints to replicate the look of the original scene. His hallmark "blur" is sometimes achieved with a hard smear made by an aggressive pull with a squeegee.

ZT Tosha: "I don't create blurs. I blur things to make everything equally important and unimportant. So they don't look particularly artistic or craftsmanlike. My behavior is determined by the situation and not by some internal traits. I do what is expedient at the moment, I respond to the moment and not based on a collection of traits. It is evident that the development of new means of communication is changing our sense of reality. The media make narratives of memory and identity into dominant and meaningful representations of reality."

Zoran Tosic a.k.a. Z.T. Tosha a.k.a. Tosha was born in Mostar, in former Yugoslavia. Growing up in Mostar with its diverse physical geography as well as traveling extensively throughout his youth, Tosha’s childhood memories are filled with the beauty and power of nature, natural disasters and forces of circumstances, many of which continue to shape his repertoire of motifs: earthquakes, volcano, ice, gravity, and fast-moving water with powerful waves and long stretches of rapids.

Tosha attended the Fine Art Academy at the University of Sarajevo, Bosnia and Herzegovina (former Yugoslavia) from 1982 -1987.

While studying at the Academy, Tosha began to incorporate sounds into some of his works. His sound sculptures were recognized as acute and original by the organizers of “Yugoslavian documents ‘89”. The organizers included his work in their international show as well as in the subsequent publication featuring the most important artists of Yugoslavia.

Drawn to Abstract Expressionism and sound installation in 1989, Tosha left Sarajevo and accepted an invitation to exhibit and work in The Netherlands, where he still lives today. Dissatisfied with his pictures, Tosha sought to develop music-based in everyday sounds, bird song and the sound of alarm; Tosha’s artistic experiments in destabilizing the frame of reference were the complete opposite of the “single-meaning” of his exhibitions at the time.

While his “Sound Sculptures” work emphasizes sound resonators, some of the combinations of vibrating elements, energizing agents and modulating devices in his painting motifs at the time were contemporary scenes, which placed him close to both Abstract Painting and copies of Modern Master paintings.

Many of these paintings are made in a multi-step process of representation. He starts with a photograph which he has found or taken himself, and projects it onto his canvas, where he traces its exact form. Taking his color palette from the photograph, he paints to replicate the look of the original picture. His hallmark "blur" is sometimes achieved with a light touch of a soft brush, sometimes with a hard smear by an aggressive pull with a squeegee.

ZT Tosha has explained that he alters his abstract paintings much more often than the representational ones. They often turn out completely different to what he’d planned.